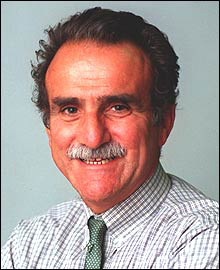 The ASIS Boston Chapter is proud to welcome Steve Kurkjian!

Steve will be speaking about his 40 year career as an investigative reporter and editor for the Boston Globe. As a senior assistant metropolitan editor, he is assigned to the newsroom's projects staff, preparing special investigative reports. In recent years Kurkjian has reported on the Zantop murder case, the bus crash that claimed... the lives of four Newton middle-school students, the Teamsters' control of New England's movie industry, and the City Hall deal to funnel millions of dollars from waterfront development into the hands of South Boston politicians, among other projects. Between 1986 and 1991, Kurkjian ran the Globe's Washington bureau, where he reported on the Justice Department, the White House, the Iran-contra scandal, and the Gulf War. Before that, Kurkjian worked as a reporter and from 1979 to 1986 was chief of the Globe Spotlight team. As a member of Spotlight, he was awarded two Pulitzer Prizes and more than 20 other regional and national reporting awards. A Boston native, Kurkjian attended the city's public schools and graduated from Boston University and Suffolk University Law School.

Steve will have his book “Master Thieves: The Boston Gangsters Who Pulled Off The World’s Greatest Art Heist” available for sale for $15 and he will be signing them.

We’re really looking forward to Steve’s presentation and we hope to see you in January!