Cost / Registration:
Price: $40 / ticket - LImit of 50 people. All are welcome. First come first serve!
This event has been cancelled. 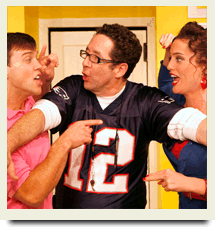 Shear Madness" is one of the most popular entertainments in the world, delighting audiences night after night with its unique blend of madcap improvisation and spine-tickling mystery.

This unique comedy-whodunit takes place today in the "Shear Madness" hairstyling salon and is chock full of up-to-the-minute spontaneous humor.  During the course of the action, a murder is committed and the audience gets to spot the clues, question the suspects, and solve the funniest mystery in the annals of crime.The outcome is never the same, which is why many audience members return again and again to the scene of the mayhem.

Voted "Best Comedy of the Year" seven times by the Boston Globe and recipient of the  title "Best Play of the Year" by both the Chicago Sun-Times and the Philadelphia Enquirer, "Shear Madness" has also received the Raven Award from the Mystery Writers of America and has been inducted into the Comedy Hall of Fame, the first play ever to receive that accolade.  "Shear Madness" is listed in the Guiness Book of World Records as the longest running play in the history of the USA.

The flagship Boston company has given birth to 42 productions in the US and "Shear Madness" has been translated into 10 foreign languages, playing worldwide in a host of cities including Barcelona, Buenos Aires, Madrid, Paris, Rejkavik, Rome, Tel Aviv, Melbourne, Johannesburg and Seoul.

Over 11 million people worldwide have joined in the fun, and while no one
has actually died laughing, some are still rolling in the aisles.