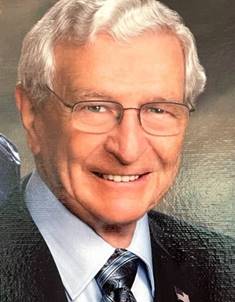 Dick graduated from Everett High School in 1951. He was pre-deceased by his mother Katherine (Powers) Barry, brother Lamont, sister Corinne, brother-in-law Thomas Lee and friend Stanley Notkin. Dick is survived by his high school sweetheart Cheerleader Mary (Lucci) whom he married on Valentine’s Day 67 years ago (together for 71). Father of Richard II and his wife Paula, Kim Arruda and her husband Deo, Lori Lombard, Scot and his wife Pamela. Adored Grandfather to Richard III, Luccia, Barryphillip, Taylor, Jimmy and William, Great Grandfather to Arden. Brother-in-law to Patricia (Lucci) Lee. Also survived by many nieces, nephews and many good friends.

After a great high school football career having played for Coach Dennis Gildea and graduating with a degree in Mechanical Arts, Dick was walking on Broadway through Everett Square and crossed paths with four classmates he asked where they were going, they replied to join the Army. With nothing else to do he signed up too.

As a United States Army Veteran, Dick served from 1952 to 1955 as a Paratrooper and Military Police Officer with the 82nd Airborne Company, Fort Bragg, North Carolina. Dick occasionally would boast he served in the Korean War but never left the United States.

Upon returning to Everett Dick reunited with the two loves of his life, Mary and Nana Lucci’s Italian cooking at 338 Main Street. This is where social distancing was first implemented as it was common for Mary’s grandmother when seeing “Richie” and Mary sitting next to each on the couch say with a heavy Italian accent, ”eh Richie you sitta to close.” Also, at this time Dick was working at various gas stations, Sesser’s Linoleum in Malden and Everett Linoleum with not much of a career path.

After serving for 11 years, Dick left the State Police entered the private sector as a Private Investigator with Investigative Associates & F Lee Bailey. In 1968 he founded Richard J. Barry Investigations with a focus on financial crime and other capital offenses. Much of his work came from the prestigious Law firms Foley Hoag and Goodwin Proctor. In 1969 Dick accepted a position as Director of Security for the Middlesex County National Bank with 22 branch locations. His original office was in Everett Square. Shortly thereafter he relocated his office to one the first buildings on Route 128 in Burlington, MA.

Although a regional company First Security had a national reputation for service excellence, client and management retention. In 1999 with 5,500 employees and nearing to $150 million in revenue, First Security was sold to Securitas Security Services of Stockholm Sweden.

Shortly thereafter Dick retired to spend more time with his wife Mary, pursuing a career as a professional softball player and watching the Patriots.

Some of Dick’s professional accomplishments and affiliations include Chairman of the National Association of Companies where he testified before Federal and State legislative bodies regarding private security legislation and standards; lifetime member of American Society for Industrial Security (ASIS) with the earned designation of a Certified Protection Professional, as a member of ASIS Dick held many local, regional and national positions; Member of the Massachusetts Governor’s state wide Anti-Crime Council; 25 year member of Criminal History Systems Board of Massachusetts; served as member of Massachusetts Attorney General Scott Harshbarger’s task force of Fraudulent Workers Compensation and Abortion Clinic Security and Safety after the horrific attacks in 1994. Dick always attributed his professional success to his time on the State Police. With that Dick served 25 years as President of the Former State Trooper’s Association. As President he worked tirelessly establishing the Massachusetts State Police Museum and Learning Center in his original barracks in Grafton, MA.

Dick was never far from his roots in Everett. He was Chairman of the Everett Licensing Commission from 1974-1980, for Mayor George McCarthy, past President Board Member and still member of the E Club of Everett, served on Mayor John McCarthy’s selection committee for the Chief of Police in 1998.

Additionally, Dick is a founding member of The Jimmy Fund’s 406 Club honoring Ted Williams, his boyhood idol. Dick idolized Ted for his athleticism but more importantly for his service to country.

Throughout his life Dick was obsessed with two hobbies, softball and the Patriots.

For many years Dick played in the Everett Man’s Softball League, playing for Carli Insurance, Tiny’s Café, and because of his pitching skills and powerful bat was recruited to play for the Everett Police Department’s softball team. In the late 80’s First Security sponsored a semi-fast softball team in the Boston City Hospital League. One year and against munch younger players, Dick was voted by league players to the All-Star game and won the MVP. Dick played softball until he was 84 years old in various leagues on Cape Cod, Naples, FL and participated in a national tournament in Colorado for players over 80 years old. Always by his side, as she was his cheerleader in high school during his football days was his wife Mary. After one game many years ago, Dick asked Mary how he played, she quipped, “your triples are now doubles and your doubles are now singles.”

Additionally, in the 50’s, after playing in the service Dick played football for a few years for St Paul’s for the Boston City Park League. In the 70’s and 80’s played a lot volleyball at the Everett Recreation Center which also happened to be the site of his first dance date with Mary during their high school years. Dick was pretty good with a tennis racket too.

Through it all Dick lived a humble life, never once did he introduce a coworker or employee as someone who worked for him, his introduction always ended with “we work together.” Asked years later after retirement if he missed working his reply was sincere, “no, I miss the people.”

Not bad for a kid from Everett.

A graveside service will be held in the Puritan Lawn Memorial ParkCemetery & Crematory, 185 Lake St, Peabody, MA 01960 on Friday, May 21 at 11:30 am. Relatives and friends are kindly invited. Visiting hours will be held at the funeral home on Thursday from 4:00 to 7:00 pm. Complimentary valet parking Thursday at Main Street. In lieu of flowers contributions can be made to Massachusetts State Police Museum and Learning Center, 308 Providence Road, Grafton, MA 01560 or to the E Club of Everett, P. O. Box 490135, Everett, MA 02149.

All employees of First Security please wear the company service pin to the funeral services.