Please join us for the first meeting of the new year. State Street is a secure facility and you must pre-register. 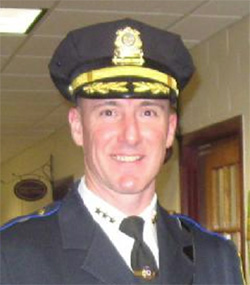 John Carmichael has been the Deputy Chief of the Walpole Massachusetts Police Department since 2010, and has served with the Department since 1996.  Prior to that, he served with the Medfield Police Department for seven years and the United States Army Military Police.  He is a graduate of the Federal Bureau of Investigation’s National Academy Class - 248, and holds a Master’s Degree in Criminal Justice from Curry College as well as a Bachelor’s Degree in Criminal Justice from Western New England College.

Deputy Chief Carmichael was a Drug Abuse Resistance Education (DARE) Officer for many years and continues to educate youth about drug issues in classroom settings.  He is also an essential component in educating the community through the efforts of the Walpole Coalition for Alcohol and Drug Awareness.  In 2011, he received 10 weeks of instruction in Contemporary Drug Issues, which focused on Commanding Task Force Operations with the Drug Enforcement Administration at Quantico VA.  Deputy Chief Carmichael is currently a supervisor of the Norfolk County Anti-Crime Task Force (NORPAC) as well as the Commanding Officer for the Walpole Police Department’s Bureau of Criminal Investigation.

For his Master’s Thesis, Deputy Chief Carmichael conducted a critical analysis of Marijuana Decriminalization in the United States.  He is a member of the Norfolk County Prescription Drug Task Force overseen by District Attorney Michael Morrissey, the Massachusetts Prevention Alliance (MAPA), and Smart Approaches to Marijuana (SAM).  He has debated drug regulations at Suffolk Law School against Jack Cole of Law Enforcement Against Prohibition (LEAP) and has testified at several drug related Bills presented at the Massachusetts State House.

Most recently, Deputy Chief Carmichael voiced concerns during the listening sessions for Medical Marijuana held by the Department of Public Health; worked with DPH during the development of the Medical Marijuana Regulations and was selected to be a member of the Medical Marijuana Dispensary Selection Committee for DPH by the Massachusetts Chiefs of Police Association (MCOPA).  He is currently the MCOPA Liaison to the Governor’s Interagency Council on Substance Abuse, Prevention & Mental Health where he continues to recognize and help implement sound responses to the drug issues in the Commonwealth of Massachusetts.